Ring in the NEW EAR! Tinnitus is commonly defined in my profession as the perception of a sound in the absence of an external sound source. In essence, it’s hearing something that isn’t actually there, and is often described by patients as ringing in their ears. Because tinnitus may arise from so many conditions, ranging from hearing loss to high blood pressure to medications, diagnosing the cause or causes can be a challenge. For many people, the ringing begins for no obvious reason.

The unique cause of otic (ear) symptoms is still a mystery for many. Included among several suggested origins are Meniere’s disease (a disorder of the inner ear that can affect hearing and balance), acoustic neuroma (a benign primary intracranial tumor) , ear trauma, noise exposure, otosclerosis (a hereditary disorder causing progressive deafness due to overgrowth of inner ear bone), ototoxic drugs (medications known to cause permanent damage to the ear) and presbycusis (loss of hearing that gradually occurs in most individuals as they grow older), and Temporomandibular Disorders(TMD). A wide range of other causes are frequently reported in otolaryngology practice including Tinnitus accompanied by vertigo(dizziness) and other ear symptoms which have been implicated in patients with a compromised systemic condition like abnormal systolic and diastolic blood pressure levels, however no correlation has been demonstrated (Weiss, 1972; Chatellier).

As a clinician examining patients who complain of tinnitus, I feel it is very important to find out if they have been evaluated by their primary doctor, an ENT (ear, nose and throat) doctor or an otolaryngologist. If they have been cleared by one of the above professionals, I look to various muscles that have shown to possibly contribute to ringing in the ear, fullness in the ear, or slight hearing loss. I will also attempt various mobilizations to the various cranial bones around the ear to see if I apply an input to the nervous system will that in any way alter their perception of symptoms. It is also imperative to do a complete evaluation of the temporomandibular system, craniomandibular system and cervical spine. Below I will touch upon a few areas I target to attempt to help alleviate this very annoying symptom.

If indicated, I will typically perform gentle soft tissue mobilization to the muscles mentioned below.

The lateral pterygoid muscle refers pain deep into the temporomandibular joint and to the region of the maxillary sinus, and can cause tinnitus as well. Ear Symptoms such as ringing/fullness in the ears may be related to an increase in activity of: 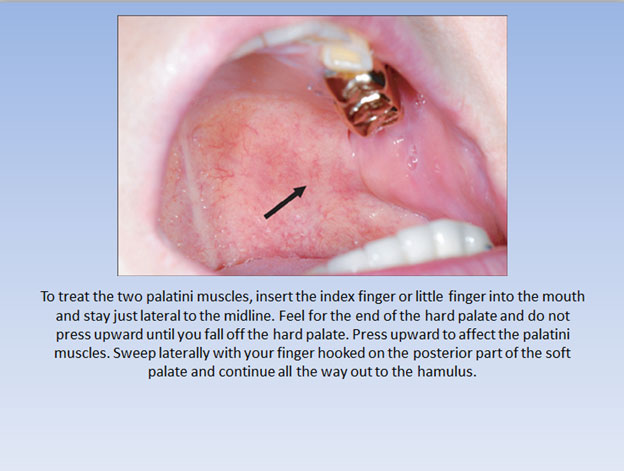 Functional Considerations of the Palatini Muscles

Finally, another treatment that is continuing to be investigated is Tinnitus Retraining Therapy (TRT). TRT trails are taking place to testing the efficacy of this facet of treatment. TRT is a non-medical intervention that uses directive counseling (DC) and sound therapy (ST) to habituate the patient’s associated negative emotional reactions to tinnitus, its perception, and ultimately, its impact on the patient’s life. Funded by the National Institute of Deafness and Other Communication Disorders.